kCTF is a Kubernetes-based infrastructure in which authors are able to expose CTF challenges with security vulnerabilities like SQL injection or even challenges involving code execution. kCTF provides tools that make it impossible for an attacker to disturb the challenge, sabotage it, or gain an advantage over other players. To this end, the infrastructure provides tools for sandboxing and isolating every instance of a challenge from other users.

The assets that kCTF manages are: 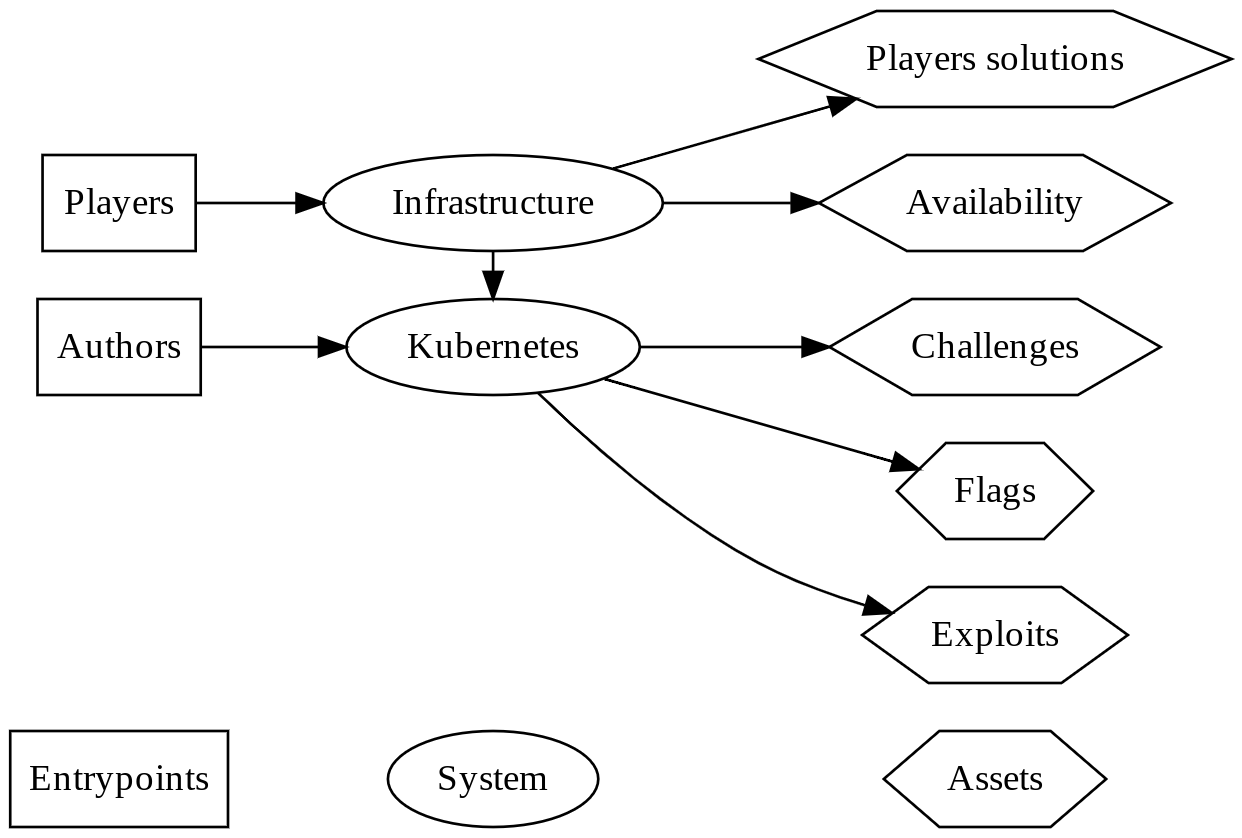 The players interact with the challenges through a Load Balancer configured in Google Compute Engine (GCE), which routes traffic to different virtual machines. A player’s internet connection could be compromised (e.g. by a man-in-the-middle attack), or the players themselves could be compromised.

The compromise of the players themselves is out of scope of kCTF’s threat model.

The environment of every player should be isolated from other players. kCTF usually does this by creating a new Linux user namespace for every TCP connection. Some challenges, however, require persistent storage. Challenges that require persistent storage in between requests require relaxing these guarantees. This means that in those cases, challenges have to be carefully designed to ensure isolation between the sandboxed environment and the environment managing the shared storage. This is necessary, because as players solve the challenges, they might leave some traces in the infrastructure that other players could find and reuse to solve the challenges faster.

The infrastructure runs on Kubernetes, which supports automatic scaling and provisioning of resources. It also supports “proof of work” setups that can limit the impact of a malicious targeted attack. However, either through misconfiguration, or lack of monitoring, an attacker could exhaust the resources of a competition.

The infrastructure itself runs on top of the Kubernetes control plane. Therefore, the system could be compromised from a challenge (e.g. through a vulnerability in the Linux kernel, or in Kubernetes itself).

The authentication between authors and Kubernetes is managed by Google Kubernetes Engine (GKE). Any vulnerability in GKE that allows unauthorized users to access GKE could gain access to all challenges code, the flags, and the exploits. In addition, any author that is compromised can undermine the competition in a similar fashion.

The challenges are stored as Docker images in a private Docker registry on top of Google Container Registry (GCR). Any vulnerabilities in GCR or Google Cloud Storage (GCS) could result in the compromise of the challenges.

The flags are stored in the challenge images. The same considerations as outlined in the previous section apply.

The exploits are stored in the challenge images. The same considerations as outlined in the previous section apply.

In general, there are two types of attackers interested in attacking a system of this type:

Finding and exploiting a vulnerability in kCTF brings different benefits to attackers, usually reputational. The barrier of entry to perform an attack is usually the cost of finding the vulnerability. In order to increase the cost of these attacks, encouraging broad research by the well-intentioned security community on the same areas could result in a lower likelihood of an attacker paying the cost of a successful attack.

Conducting an attack usually consists of a cycle of trial and error. Although kCTF is open-source (which reduces this to some degree), in practice the cost of being stealthy directly correlates with the amount of preparation required. If the kCTF infrastructure provides thorough monitoring and alerting, this can increase the cost of preparation for attackers. Work to implement this is tracked in Issue #30.

Disrupting a competition done for the benefit of the security community is not immediately obvious, unless the competition itself, or the organizers, have managed to incentivise some of the members of the community to go through the effort to perform such an attack. As such, running a fair and high-quality competition is an easy way for organizers to prevent alienating and making skilled players convert from users to attackers.

kCTF attempts to address and balance several security concerns with usability and complexity. Understanding and improving the security of kCTF will be a constant process that will be addressed over time, based on the feedback of the community as different problems and solutions are discovered. This document will be kept up-to-date as new information arises.