In this work, we investigate variant calling across a pedigree of mosquito (Anopheles gambiae) genomes. Using rates of Mendelian violation, we assess pipelines developed to call variation in humans when applied to mosquito samples. We demonstrate the ability to rapidly retrain DeepVariant without the need for a gold standard set by using sites that are consistent versus inconsistent with Mendelian inheritance. We show that this substantially improves calling accuracy by tuning DeepVariant for the new genome context. Finally, we generate a model for accurate variant calling on low-coverage mosquito genomes and a corresponding variant callset.

Many of the first population-scale genomics projects were performed on human samples. Tool development has been strongly influenced by this. GATK, for example, suggested a set of known human indels when it included indel realignment in its best practices, and still includes the use of the human dbSNP resource in the BQSR step of its best practices. In addition, human variation is shaped by properties and a history not shared across many organisms. The short generation time and large number of progeny in many species suggest a different ability to generate, tolerate, and select on variation when compared to humans. This can result in genomic signatures that might require a different set of priors to analyze in an ideal manner.

The MalariaGEN project uses genomics to understand how population genetics in humans, mosquitoes, and Plasmodium relate to the transmission, prevention, and treatment of malaria. This project has generated medium-coverage whole genome sequencing (WGS) data on mosquito populations from the Ag1000G dataset. This also contains large pedigrees (currently 80 samples from 4 crosses), which allows us to assess and ultimately improve tools for genomic analysis applied in mosquitoes.

First, we sought to understand the performance of existing methods on the MalariaGEN data by calculating Mendelian errors on trio data. Specifically, we started with this trio:

Our first set of experiments was to run the basic WGS settings of DeepVariant v0.7 and GATK4 HaplotypeCaller directly. This created single-sample callsets for each of the three individuals. For DeepVariant, we merged these callsets into a cohort VCF containing the three individuals using GLnexus with the --config DeepVariant flag, which creates a unified representation of variants but does not perform any filtering or joint calling of genotypes. For GATK4 HaplotypeCaller, we followed GATK’s “best practices” workflow for germline short variant discovery, by running CombineGVCFs to consolidate gVCFs and GenotypeGVCFs to perform joint genotyping. Due to the lack of a mosquito dbSNP, GATK4 BQSR cannot be used here. All statistics are calculated on the non-mask regions of the genome, though there is little difference when mask regions are included.

In contrast to humans, where the Genome in a Bottle Consortium (GiaB) has developed a set of gold standard variant calls in multiple individuals, we do not have ground truth data for the mosquito variant calls. We can estimate the accuracy of the callsets as a whole using Mendelian inheritance violations as a measure of the error rate.

Evaluating the performance of current pipelines on mosquito genomes.

The initial analysis comparing the GATK and DeepVariant results used the open-source RealTimeGenomics RTG Tools to identify Mendelian violations. These are stratified by the genotype quality of the call (minGQ), which is a caller-produced estimation that the genotype is correct.

There are multiple points of interest in Table 1.

Based on these results, we hypothesized DeepVariant uses properties in the genome structure of humans which are powerful for variant calling, but are different in mosquitoes.

There are two ways that an individual can be called as homozygous reference at a position in DeepVariant. 1) There is little or no evidence of any variation at the site, so no example is created and evaluated by the convolutional neural network (CNN). 2) The site has enough variation that an example is created and evaluated by the CNN, and the most likely of the three states (HOM_REF, HETEROZYGOUS, HOM_ALT) predicted is HOM_REF. 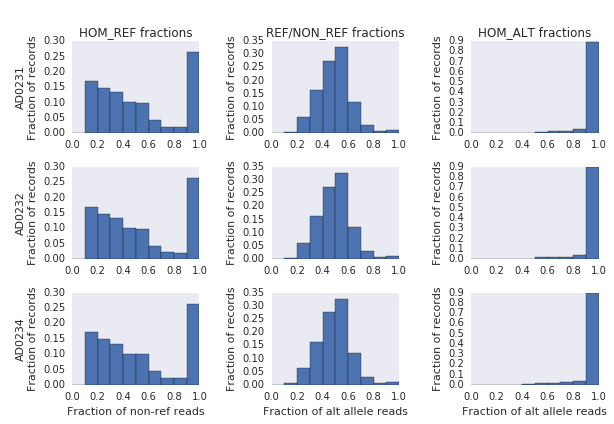 Figure 2: Allele depth fractions for each individual at the three common variant types.

To understand this phenomenon better, we examined individual sites that were confidently predicted as HOM_REF but composed of many non-reference reads. A representative example is shown in Figure 3. 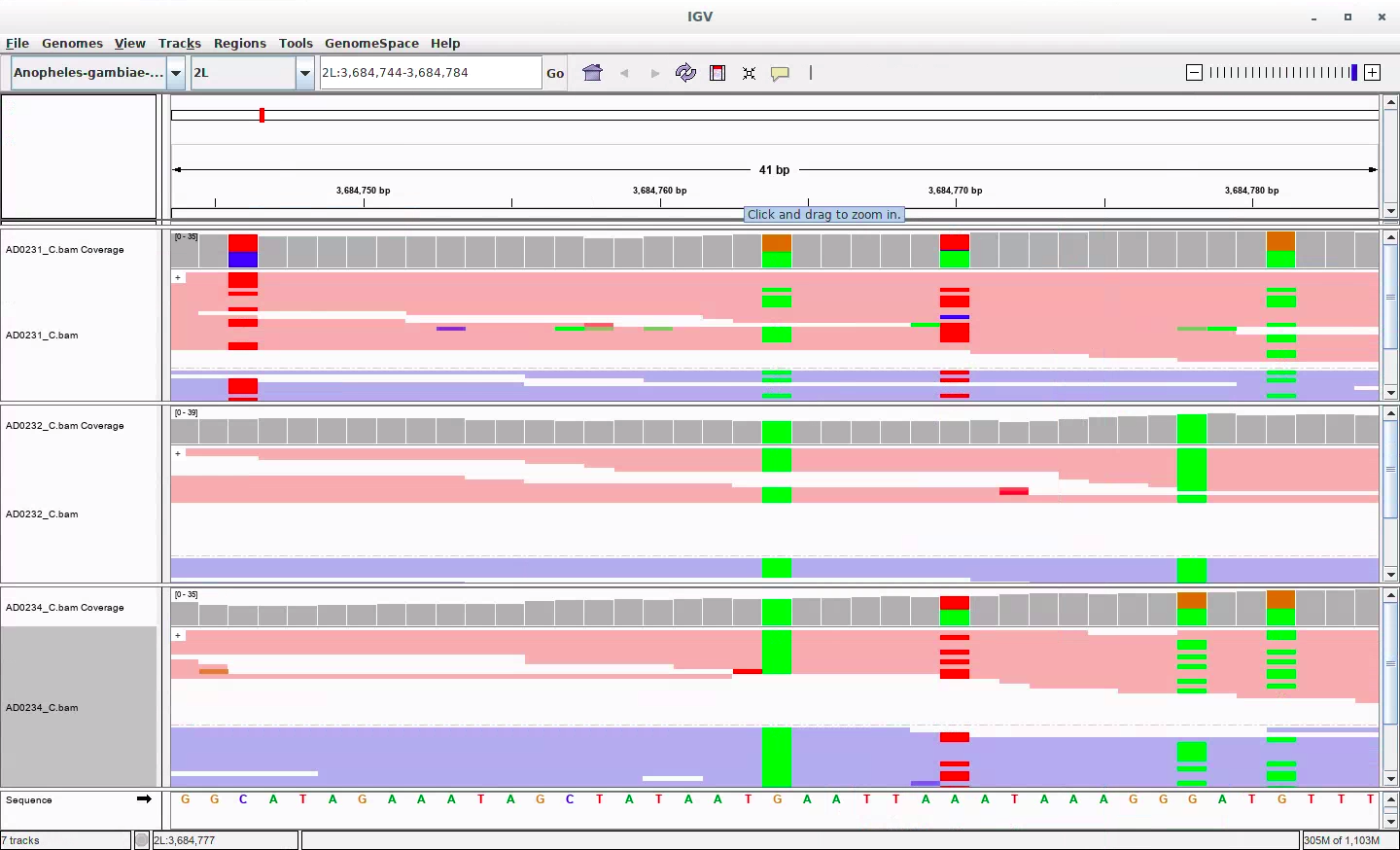 The mother is called as HOM_REF despite having 14 of the 30 reads covering the region support the alternate allele, suggesting misclassification of a truly heterozygous site. The segregation of variants along the reads and subsequent transmission to the child corroborate this site as a real variant. From this, it seems clear that the presence of nearby variants is a signal that a variant is suspicious in human variant calling in a way that is true to a different degree in mosquitoes.

A hypothesis for why this behavior occurs is that in humans the number of true variants seen in a single window is much lower than the number seen here, and regions where multiple putative variants occur are enriched for false positive calls. Because of the lower variant density in humans, clustered variants of this nature may be more likely to be caused by mismapping from similar genomic regions, while in mosquito genomes the higher variant density may mean a signature like this likely reflects true variants. This implies that retraining on mosquito variants could improve our model’s robustness to these data.

Designing the “curriculum” to re-train DeepVariant for the mosquito genome

To train a DeepVariant mosquito-specific model, we generated a “silver standard” callset for any child of the AD0231-C and AD0232-C mosquitoes using calls from GATK4 with additional filters. Confident HOM_REF calls for each mosquito were defined as regions with coverage of at least 15 reads, a minimum reference read count of 13, minimum reference allele fraction of 0.86. Confident HOM_ALT calls for each parent mosquito were defined as calls with coverage of at least 12 reads, a minimum alternate allele read count of 10, minimum alternate allele fraction of 0.83. The child “silver standard” callset is composed of variants for which both parents have confident calls, restricted to the non-masked regions of the mosquito genome, and contains 972,344 heterozygous variants and 560,307 homozygous alternate variants.

We trained the model using these positions as truth and the read data from 5 other progeny of AD0231-C and AD0232-C for training: AD0242-C, AD0243-C, AD0244-C, AD0245-C, AD0246-C, and then tuned the model using the read data from AD0250-C. To train a DeepVariant mosquito-specific model, we initialized the training from the v0.7 WGS model and selected the checkpoint for which the tuning set loss was smallest.

Separately, we also started from DeepVariant calls and applied training in a similar way to achieve an improved model. The ability to start from the calls of multiple methods raises an interesting promise: the ability to train DeepVariant with the information perspective of any of the diverse set of community analysis solutions. In the event an investigation reveals that a method has unique insight in a subset of the overall variant calling problem, we (or you) can produce examples to train DeepVariant to capture this insight.

To summarize from a machine learning/training perspective, we are optimizing for two properties: correctness of the label, and representativeness of the examples. To generate examples, we look for positions that we can confidently determine the transmitted allele from each parent, but do not look at the evidence in the child. This allows us to represent sites that may be difficult in the child, but which have a known label. Furthermore, we generate examples of REF, HET, and HOM ALT in approximately the same ratio that DeepVariant would see them in a real sample.

Importantly, the techniques to generate this silver standard dataset should generally apply to any case where a pedigree of individuals exists, regardless of whether it is a non-human species or human samples sequenced with a novel technology.

The final callset was generated as described for the initial v0.7 WGS model. Initial results from evaluating the DeepVariant mosquito-specific model on AD0234-C are shown in Table 2.

As Table 2 demonstrates, the Mendelian violation rate of the DeepVariant mosquito-specific model is lower than GATK at a comparable number of variants. To further illustrate what the difference is, we ranked the variant calls from GATK4 and from the re-trained DeepVariant model by the confidence that each caller assigned the call based on the genotype quality. This allows us a direct comparison between the accuracy at a variant-by-variant level. As Figure 4 indicates, DeepVariant is significantly more accurate overall, across all calls. DeepVariant is also able to provide a higher reliability in its most confident calls. Variants with the highest quality scores from DeepVariant have a very low Mendelian violation rate (reaching less than 0.1%), while a batch of GATK4’s most confident calls never achieve less than a ~1% Mendelian violation rate. 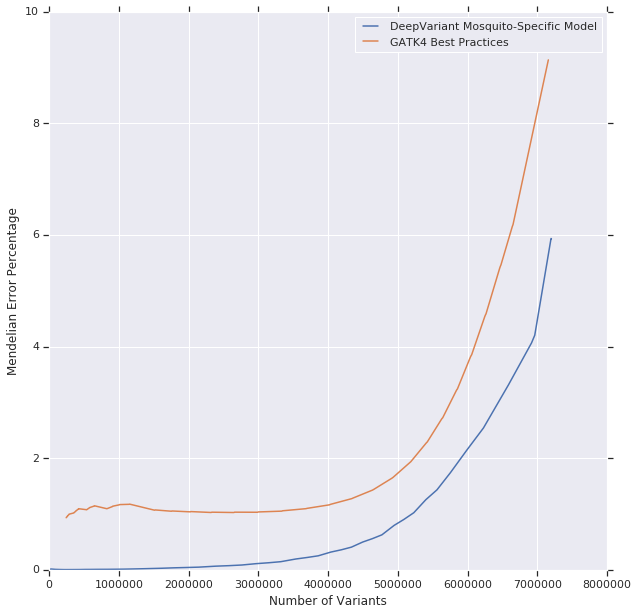 Figure 4: Number of variants and Mendelian violations in trio callsets from GATK4 and the DeepVariant mosquito-specific model, per varying levels of minGQ, based on calls in the child. A smaller number of variants corresponds to a higher minGQ threshold. So the Mendelian violation rate at 1,000,000 x-axis position is the rate seen in the top 1,000,000 variants ranked by the confidence of GATK4 or DeepVariant.

The main products of this investigation are a demonstrated ability to retrain DeepVariant for improved performance in new genomes or genomic contexts. This has generated callset of the mosquito pedigree for investigation by the community.

This initial foray into mosquito variant calling has identified multiple areas for further investigation. First, additional evaluations of the variant calls of other progeny of AD0231-C and AD0232-C will address how generalizable these results are to those samples. Second, creating “silver standard” calls for the other mosquito parents and evaluating the models on their progeny will further address the generalization capabilities of the models to the mosquito genome more broadly. Third, a deeper investigation into the causes of the confident HOM_REF calls for sites with mostly non-reference reads is warranted, which may involve exploration of alternative modeling strategies to explicitly capture prediction uncertainty.

The final merged callsets generated by the DeepVariant mosquito-specific model and GATK4 are publicly available in Google Cloud Storage under gs://brain-genomics-public/DeepVariant-blog/MalariaGEN bucket. Instructions on accessing this dataset can be found in Cloud Storage documentation.