A type stub is a file with a .pyi extension that describe a module’s types while omitting implementation details. For example, if a module foo has the following source code:

pytype allows an unannotated parameterized class’s contained type to be changed, an operation we call a mutation, which .pyi files do not have a way of expressing. Thus, pytype uses an extended pyi format, PyTypeDecl (“Python Type Declaration”) or PyTD, in which mutations are described by assignment to self in a method body. For example, pytype’s builtins.pytd types dict.update as:

In practice, the terms pyi and pytd are often used interchangeably.

pytype relies on the stubs provided by the open-source typeshed project for most of its standard library and third party type information. For modules for which accurate mutation information is important, we shadow the typeshed stubs with custom pytd stubs located in pytype/stubs/{builtins,stdlib}. During analysis, pytype will emit stubs of inferred type information for local files to communicate between pytype-single runs.

Import resolution is handled by the load_pytd.Loader class, which loads type stubs into a cached internal AST representation. The loader finds stubs for local files in one of two ways:

The second approach is used by pytype-single by default, but pytype’s whole-project analysis tools always pass in --imports_info for more reliable, reproducible stub finding. The pytype GitHub project uses importlab, another Google open-source project, to generate the dependency graph from which imports_info is constructed.

As a concrete example, suppose a module bar contains the following imports:

pytype will first analyze dep1 and dep2 and write type stubs to an output directory, say /home/.pytype/pyi/. It will then construct this imports_info file:

and use it for import lookup when analyzing bar.

If an import can’t be resolved locally, pytype falls back to the standard library, then typeshed/third_party.

The following diagram shows a common import resolution path: the VM calls the loader, which finds the right file path and then parses the contents into an AST. The bolded methods are the entrypoints into the loader, which also happen to be the methods that do AST postprocessing and finalization. 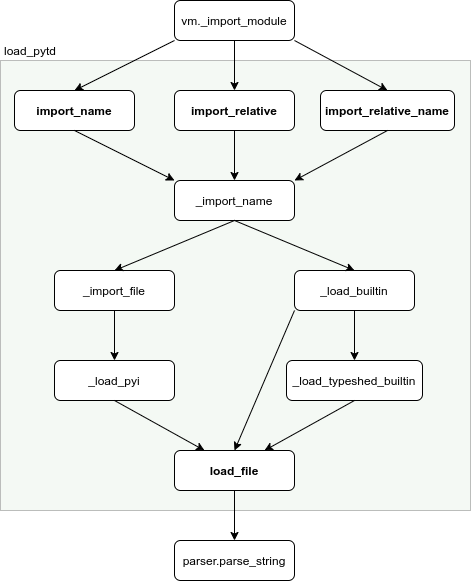 The stub parser in pytype/pyi reads in a type stub and produces an AST representation of its contents. It uses the open source typed_ast parser to convert the type stub into a python AST (type stubs are required to parse as valid python3), then generates a pytd tree from the AST.

The pytd nodes are defined in pytype/pytd/pytd.py as immutable attrs classes.

AST nodes are manipulated via a visitor interface. A visitor has Enter and Visit methods for pre- and post-order traversal of the tree, as well as Leave methods for cleanup (more detail here). For example, pytype.pytd.pytd_visitors.PrintVisitor, which produces a string representation of an AST, contains the following (simplified) logic for visiting a class:

Nodes of type pytype.pytd.pytd.Class are passed to this method, which returns a string representation of its input. Note that, because the class’s children have already been visited, they are strings by the time VisitClass runs.

When pytype finishes analyzing a module that another module depends on, it outputs a type stub for the former that the latter will use to resolve imports. The pytype.output module is responsible for converting the abstract values produced by pytype’s shadow bytecode interpreter into AST nodes.

The output module contains two core methods: value_to_pytd_def, which converts an object to its definition (for example, InterpreterClass(Foo) to class Foo: ...); and value_to_pytd_type, which converts to the type (InterpreterClass(Foo) to Type[Foo]). For convenience, these methods can be accessed as to_pytd_def and to_type, respectively, on abstract values.

To decrease the size of emitted type stubs, pytype runs the visitors in pytype.pytd.optimize to simplify ASTs as much as possible before serializing them. This also ensures that equivalent nodes are reduced to a canonical form.

For example, suppose pytype is analyzing the following code, which describes a simple company structure:

pytype produces a raw pyi in which Company.employees is inferred to be a list of both CEOs and employees:

The optimize.SimplifyUnionsWithSuperclasses visitor then notices that a CEO is a type of employee and simplifies the pyi to:

For improved performance, pytype will read and write pickled pyi files instead of plaintext when run with:

The pytype.pytd.pytd_utils.{Load,Save}Pickle methods can be used to debug pickles.